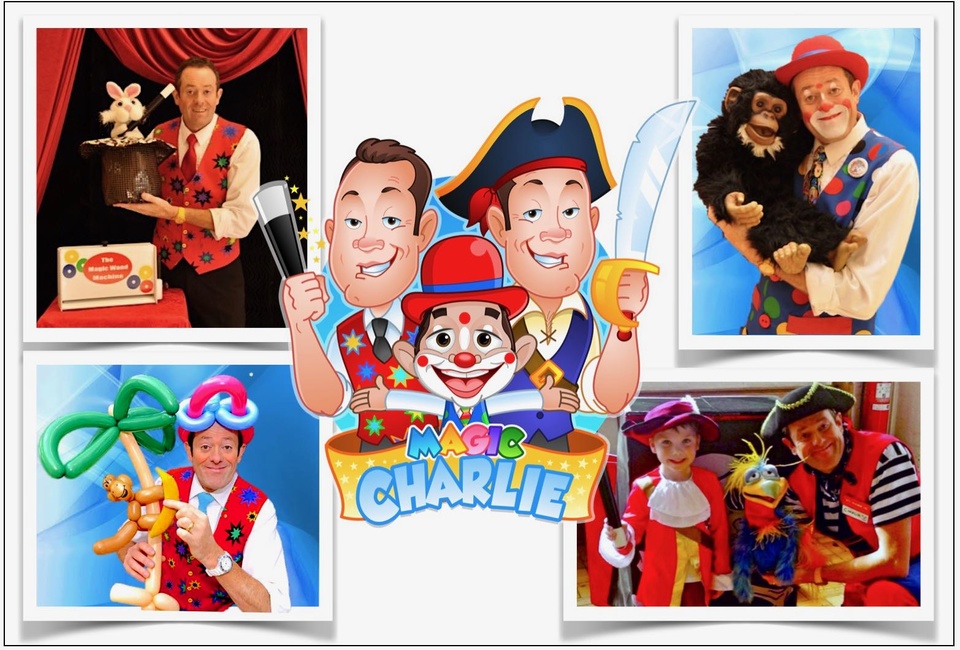 Charlie is a very talented and hugely popular children's entertainer for Birthday Party shows and all other special family occasions and corporate events. He performs as either Magic Charlie the Magician, Charlie the Magical Clown or as Charlie the Pirate,  or as Charlie Potter who is very popular at Wizard themed parties or around Halloween time. He is based in Fareham which is between Portsmouth and Southampton in Hampshire, and is one of the most experienced and sought after family and party entertainers on the Portsmouth, Southampton, Winchester, Chichester, Hampshire, Surrey, Berkshire, West Sussex, Dorset and Wiltshire party circuit.

What makes Charlie so popular is not only his very Calm and gentle nature but his patience with young children. This is what makes him so in demand with parents and bookers of many Birthday Parties, Christenings, Family Parties, Primary & Infant Schools, Playgroups, Pre Schools, nurseries, Corporate and Private events across the South of England and beyond.WATCH CHARLIE IN ACTION HERE.

Being a dad himself to two young daughters helps Charlie to know exactly what makes little ones tick. He is also able to keep up-to-date with all the latest children's trends, films, and characters. keeping his act not only modern but fresh.

So if you are after a family entertainer who will amaze your guests at a Birthday party with a comedy magic show. A funny clown who will juggle performs plate spinning or a comedy Pirate who will perform balloon modelling and balloon twisting for a corporate event. Look no further than Charlie the Professional, full time, Children's Entertainer.

Charlie is also a very well respected award winning magician, so not only does he perform the hilarious routines that you’d expect from a clown, such as juggling, plate spinning, balloon modelling, magic and much more. Leaving them spellbound and giving them wonderful memories of their very special, magical day.

Charlie has performed on Television on many occasions and Channels such as BBC, ITV, SKY Television, MTV and Norwegian TV. He has also appeared at many prestigious events and venues for the children of many well-known celebrities and is also very proud to have been asked to perform for the Royal Children on several occasions. He has also performed all over the world working on many of the top luxury cruise ships.

Whether it’s the 45-minute comedy magic show, 1 or 1.5 Hour & 2 Hour Music, Magic and Games Shows or the full 2-hour stress-free party  his ultimate Disco Magic and Games show Charlie, (The parents favourite) will entertain the children with Music, Magic, Games, Juggling, Plate Spinning, Party Dances also the children will simply love meeting one of his many hilarious puppets. His shows are full of fun, audience participation, laughter, amazement and your child will be made to be the “Star of the show” from the offset.

Charlie supplies all the great prizes and giveaways needed for the show and everyone is made to feel a part of the performance and there are lots of opportunities for the children to join in. Charlie always makes sure that no child is ever left out, and gives everyone a gift
to take home with them, plus a full-colour glossy souvenir photograph as a keepsake of the special day.

Other than performing at Birthday parties, Weddings, Christenings, Schools, Pre Schools and fetes, Charlie is also a great mix and mingle, walk about entertainer, which is ideal if you don’t just want your entertainer to perform static shows. Charlie will mingle amongst your guests making them laugh, performing close up magic, plate spinning, juggling and will also perform amazing balloon modelling with such sculptures as aliens, penguins, aeroplanes, motorbikes, Bouquet’s of flowers, the list is endless.

So if you want a stress free party or performance that is full of laughter, happy children and smiling faces guaranteed, then look no further. But don’t take our word for it check out the many testimonials Charlie has received from his very satisfied customers below.
Or see more comments and thank yous, along with what Charlie's been up to, his latest news and pictures of recent parties by visiting his FACEBOOK PAGE.

Charlie was fantastic, some children arrived early and he even entertained them and had them laughing as he was setting up. Charlie was very accommodating and the birthday girl was made to feel very special indeed. I’m sure Charlie will be getting a few more bookings from the party if the many positive comments were anything to go by.